BC Man begs for Family Law Reform in Suicide Note

A 45 year old man killed himself earlier this month due to the amount of child support and spousal support he was ordered to pay two women who both mothered his children.

The issue here is not the principle of child support. Raising children costs money. The issue here is that this man was unfortunately not able to convince the court that he was being ordered to pay more than he brought in, in income. As men we have to realize that part of that comes from our own demise. Too many men have hidden income in family law litigation to prevent themselves from having to pay legitimate child support and this man was the collateral damage. The system AND every man or woman out there who has not provided for their children should be blamed.

Rest in peace man. Let’s keep this conversation going to ensure his death and note has an impact where it should.

He wrote the following suicide note that was found in his truck: 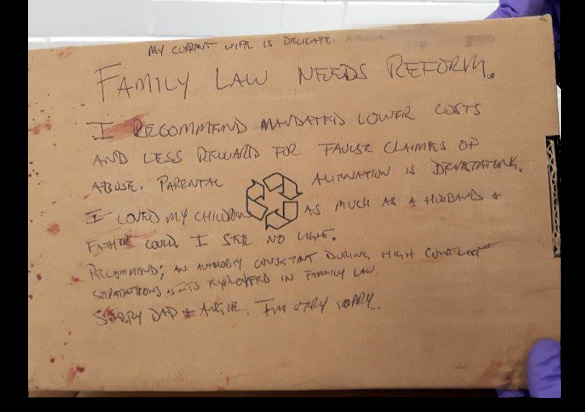 To read the original article: http://www.theprovince.com/christie+blatchford+pleaded+family+court+reform+suicide+note/13213608/story.html