Dad Of The Week – Everlast

Many of you know you Everlast’s music, and some of you may even know it and not know it’s Everlast or who exactly he is. Definitely one of the most underrated musicians and artists. From his origins with “House of Pain” and their infamous single “Jump Around” that is still blasted at sports events all over the world, to his feud with Eminem…. And then over to his rock-hop days with his massive single “What It’s Like” , to his co-writing of Snoop Dogg’s song “My Medicine” then back to RAP with his group La Coka Nostra and now to him touring an acoustic version of everything he’s ever done and some amazing cover songs The guy is seriously a musical genius.

All of that being said, his music has most likely touched all of us in some way the past decade plus… But even more of you don’t know is that he’s an amazing father of two daughters. He is married to one time model (and more) Cassia Riley and their first born daughter was born with cystic fibrosis. Everlast has touched on it quite a bit in interviews and through his music. He’s passionate about providing information and letting his fans know exactly what his family has been going through.

One of his more recent songs “Sixty Five Roses” off of his acoustic album actually touches on the disease specifically. When children are diagnosed with the disease at a young age and they try to communicate what they have, “Cystic Fibrosis” often comes out as “Sixty Five Roses”. You can see how that would easily happen to a young person still attempting to grasp the English language :).

Anyways, the bottom line this. This man defines our movement. “No DeadBeat Society”. Much respect to you Mr. Whitey Ford. 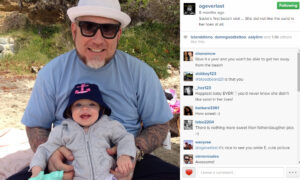 If you are interested in learning more about Cystic Fibrosis I recommend checking out the following website: http://www.cysticfibrosis.ca/