I formed my idea of fatherhood mostly around who I didn’t want to be. – Austen Miles’ Story

We were recently able to connect with an amazing guy, who represents what this movement is about whole-heartily.  Austen Miles is a man who has seriously been through a lot, more than most of us fortunately ever have to face. The most unfortunate part is that he endured so much as an innocent child. Focusing on fatherhood and the positives he was able to pull from his life he has become someone we should all look up to.

Austen agreed to exclusively share his story with us.  Take the time to read this, it’s an important journey that needs to be shared.

For the first twelve years of my life, I grew up in what I, along with anyone who knew us, thought to be a perfect example of a happy family. I spent the majority of my time with my three sisters and two brothers, and rarely interacted with anyone outside of our family unit. In addition to this, my parents operated under the guise that we were home schooled. It was the perfect recipe for disaster; I was growing up in a burning house and didn’t know it.

When I was twelve years old, my parents were investigated, arrested, and eventually found guilty on multiple counts of child abuse, child neglect, and rape, among other things. Suddenly I found myself moving from one foster home to the next. At the end of a thirty-six month period, I’d lived in seven foster homes and had lived with a total of twenty foster parents.  By the time I was fifteen, a judge finally allowed me to live with my adult siblings, ending my time in foster care.

I didn’t realize it at the time, nor did I appreciate the experience, but I needed to get away from my parents. That’s a hard thing to accept, even now as a 32 year old man. I met some really good people who showed me kindness when I needed it the most. Some of the lessons I learned during that time in my life will forever be etched in my mind. More importantly, I learned that I am strong and capable of making it through the hardest of circumstances. This more than anything has informed the way I approach many of the obstacles that I have faced as an adult.

I’m not going to lie; there were a lot of negatives. I’m not trying to sound bitter, it’s just not an ideal situation. At the time, the negative impacts had more to do with the anxiety I felt by being separated from the only people I’d ever known. I was the fifth of six kids and had always had older siblings to look up to. Suddenly, I was out in the world living with strangers and having to fend for myself. Sometimes those strangers suffered from a severe lack of empathy and could be quite cruel and insensitive. A lot of the other negatives included common foster kid problems such as lack of or incorrect information in my file. For example, I had a hard time convincing my foster parents that I was not illiterate, simply because someone had incorrectly assumed that I was. Mostly, I didn’t feel safe for a very long time; even well into adulthood. I frequently have nightmares and panic attacks about losing everyone that I love and being confined against my will. It’s something that I see a therapist for but also just a part of my life that I’ve had to learn to live with.

My wife and I have been married for nearly twelve years. Much of my battle to overcome my past has been fought with her by my side. I really could go on and on about how much I look up to and admire her for being such a warrior. Not just for me, but for our kids as well. I have two sons and one daughter. They weren’t always mine; in fact, just two years ago they were my nephews and niece. Life has come full circle in some ways and through a series of events one of my siblings was no longer capable of taking care of them. I won’t go into much detail about that because I feel that it’s their story to tell or not tell. I will say that it wasn’t easy an easy task obtaining custody of all three kids, but one day it happened and overnight I became a dad to a fifteen, ten, and one year old. Life has certainly been a series of one unexpected event after another. My past is not always easy to talk about, but I know that there are so many others like me who have been affected by living in foster care, let alone the circumstances that landed them there to begin with. I didn’t have anyone that I could look up to and know that he or she had been where I was and had survived. I would like to be that person for others, so that they at least hear that life, although not always easy, certainly can get better and it’s worth fighting for.

For a long time it was a foreign subject. I was never close to my dad and I suspect he never really had a desire to be a father. That’s a tough thought to live with and I really struggled with it for a long time. I formed my idea of fatherhood mostly around who I didn’t want to be. Now that I am a dad, those ideas have somewhat shifted. In some ways fatherhood has felt instinctual. In other ways, I don’t really know what I’m doing, and feel that I am at best walking across a narrow bridge in complete darkness while crossing my fingers. I mostly feel this way in my interactions with my oldest son, who is now seventeen. That’s a tough age to be and to parent anyway. He and I are not very much alike, so it’s difficult to understand exactly where he’s coming from. I also don’t have very many experiences to draw from because his current day-to-day concern is in regards to how much time he can spend playing on his Xbox, whereas when I was his age I was working two jobs to pay bills. I’m glad this is not his experience. But sometimes I feel a gap between us and I wonder if he feels it too. If I had to define what fatherhood means to me, I would say that it means being someone who is open and real with his children; someone who can laugh and cry with them; someone who is in their corner rooting for their best interest.

I try to live without regret, as I hate looking back in a negative way. If I make a mistake, I try to learn from it and move on. I do, however, have a couple of things that haunt me. About a year ago, I received word that my dad was dying. He and I hadn’t maintained much communication and I hadn’t seen him in nearly ten years. Now, he was unconscious, lying somewhere in a ward, and taking his last breath. I made a decision to not see him before he died. This was a tough call to make and one that I am sure doesn’t make a lot of sense. I truly don’t regret that decision, but sometimes I feel anxiety about allowing him to just pass away without any family by his side. Sometimes it makes me feel like a bad son. I know that I’m not a bad son. I know that I made the right decision for me. But sometimes it’s hard to shake the guilt. My advice for managing any of it is this: go to therapy. Seek help. Don’t do it on your own.

When I was in foster care, the best advice I ever received came from someone I barely knew, but it had a huge impact on me. This friend suggested that I try to look past the confusion and the hurt to learn something from what I was going through so that after it was all said and done it wouldn’t have happened in vain. I think my advice would be similar. As a foster child, sometimes the only thing that you can count on is you. Find the strength within yourself to not let what’s happening on the outside negatively impact you on the inside. Be strong. Be a warrior. You can survive. Life can get so much better if only you don’t stop believing in your own resilience. 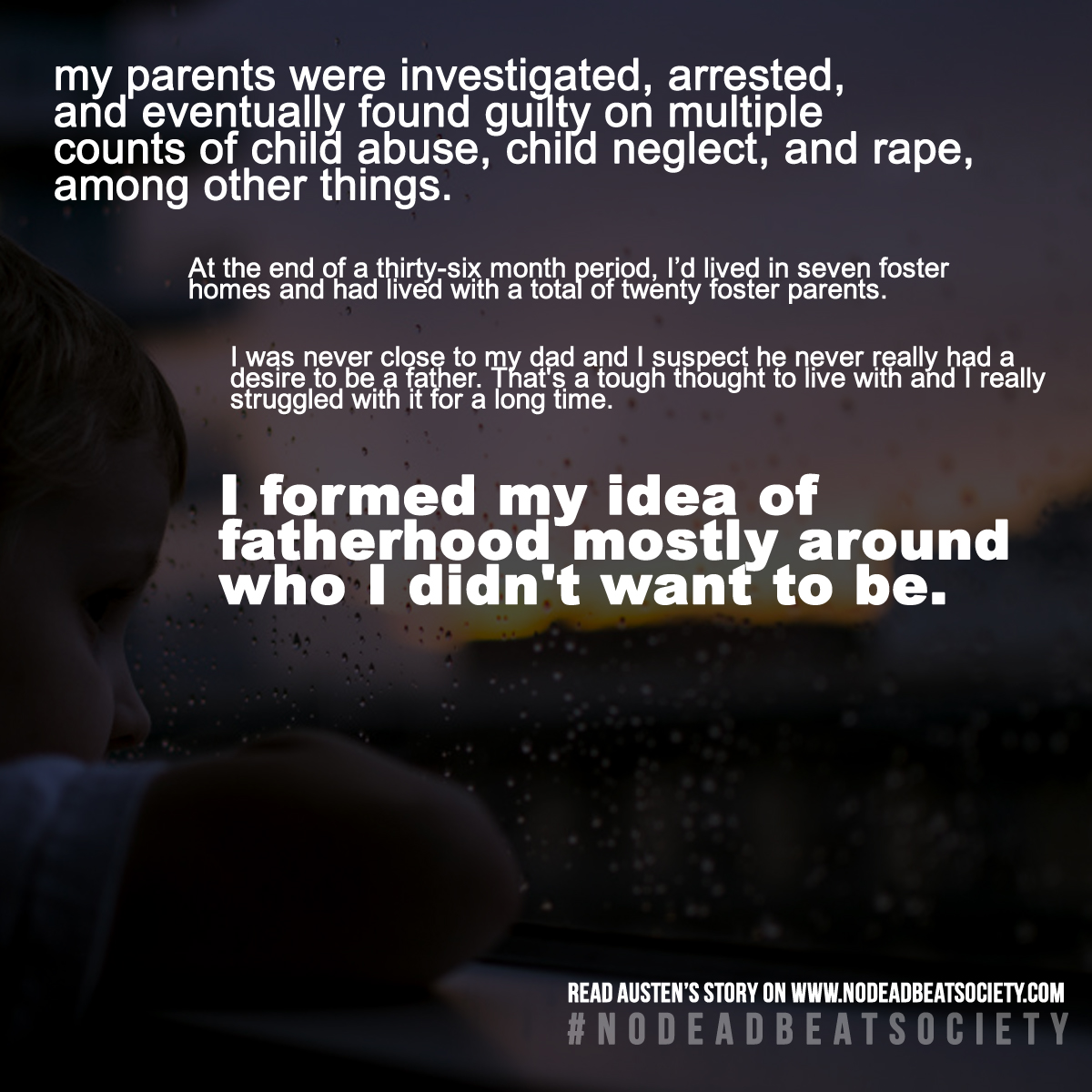