I hated the MeToo campaign

When the #MeToo campaign originally launched it didn’t sit right with me. I can’t explain why exactly, or maybe it was multiple things that I experienced or saw in my life that came together in my mind telling me that it just wasn’t right. It was consuming the air waves, social media, and everything in between. It seemed like all of western society was hating men. That all they were saying is that men are horrible and we should be ashamed of ourselves. It’s probably because I have invested so much work in the area of “Men’s Mental Health Awareness” and had so many conversations with brilliant and amazing men and fathers that this just seemed to make me angry. How can these news anchors be almost smirking while they paint a picture I perceived as most men being disgustingly evil?

Maybe it wasn’t just that.

Maybe it was that I personally have seen a woman falsely accuse men (not me) of sexually assaulting her and watched her get away with it even when the evidence proved that she lied? The system seemed to embrace her and care nothing about the men who’s lives were impacted.

Maybe it was all of the lists that were being created online, one that even drove a man to suicide, see vice.com.  Perhaps he was a rapist. Perhaps he was a terrible human being. But it seemed the local scene was more interested in promoting a list than going to the police. And then even if that was mentioned all that was brought up was “facts” presenting that very few men actually get charged.

Maybe it was that there are youtube videos like this one, where a woman walks around surprising men by touching and rubbing their bald heads and social media + society just seems to laugh it off? 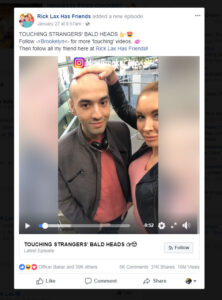 Don’t get me wrong. I watched the video and I laughed. I loved it even and shared it. But if it was reversed would there be comments under the video talking about how it was assault or invasive if it was a man doing it to a woman?

Here I was creating a movement, a brand, a network, promoting men becoming better people and it seemed everywhere I looked, the world and even other men were only talking about how shitty men are as human beings. Men claiming that they were “feminists” and that all men were pieces of scum. Wouldn’t that include themselves as well?  I started questioning everything. How can this be? We aren’t all like that. Are we that horrible?

I constantly found myself questioning the #metoo movement. I struggled with balancing finding compassion and questioning how could these men do these horrible things? How could these men who were in politics, Hollywood, or any position of authority have done these stupid, moronic, and pathetic things actually expecting that they would get away with it? What was running through their mind in those moments where they took advantage and simply went to sleep at night? That’s probably something I will never have comprehension of or understand.

I was honestly worried that anytime a boy or man attempted to hold a girls hand,  or go for that “life changing” first kiss they were going to be automatically labelled an assaulter.

But I was taking it too far. I was being stubborn. And my entire perspective changed in a matter of seconds.

I was having this exact conversation in a car driving with two close friends. One male and one female. And out of nowhere in the discussion the female admitted that she had been sexually assaulted in her youth. I had no idea and I’ve known her my entire life.

I quickly went through all stages of the emotions. Confusion. Anger. Sadness.

And it made me realize that #metoo isn’t about men vs women, us vs the police, us vs the criminal justice system, it’s about more than that. It’s about a flaw in some people (men and women) where they think that just because they have authority over someone, that they get to dictate what or how that person uses their body or how they feel.

The bottom line is that these things, these horribly shitty things, have been happening since the beginning of mankind’s existence. The difference is, we are at a time now where society will not accept it. And in my opinion that’s a good thing.

I find it unfortunate that it had to take someone so close to me to make me understand just how tragic abuse of that nature is, but in my own journey it was needed to reverse other perspectives based on systematical problems I’ve witnessed.